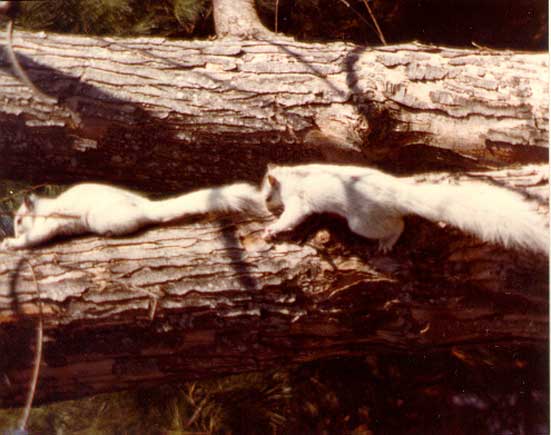 During a vacation excursion to the Orlando area, Bob Glesener happened upon a Wildlife Rehabilitation and Refuge Center known as Back To Nature Wildlife, Inc.   There amongst cages housing everything from injured bald eagles to half-wolves was a white squirrel named Melanie (could the name be a play on words referring to the pigment melanin she is so conspicuously lacking?).  Melanie shares her cage with her sister Missy who, although raised by human hands from the same litter, is a normal gray squirrel.  Melanie, herself, is not only white but has the same basic pattern of pigmentation, i.e. dark eyes, dark markings on the head between the eyes and ears, and a dorsal stripe, as the white squirrels of Brevard.  However, her head patch is broader than that of the North Carolina population.  It will be interesting to see if Melanie’s dorsal strip falls within the limits of variation of the Brevard population, once that study has been completed.  Upon first observation, it too would seem to be broader than that of our own squirrels.

According to popular folklore, white squirrels arrived in Brevard from Florida.  There a circus caravan wreck had allegedly released white squirrels of questionable origin (Hawaii).  The squirrels thrived in a pecan orchard and were harvested for sell by a local entrepreneur.   This was in northern Florida between Jacksonville and Tallahassee, possibly near Madison.  A friend of the merchant delivered a pair to his niece in Brevard in 1949 who eventually entrusted their care to her grandfather who kept them in a large cage in his backyard on Johnson Street.  When one escaped, he released the other.  Today, white squirrels with similar markings are found from Cashiers in Jackson County to the west and Hendersonville to the east (a span of approximately 50 miles), interbreeding with native gray squirrels.  They apparently spread from Brevard by either migration or trapping.   Melanie was captured in

Kissimmee FL where observers feared for her survival because of her contrasting coloration (see Melanie’s Biography from Back To Nature, Inc.).  Other than Melanie, her capturers were unaware of white squirrels in that area at the time; they brought her to the rehab center, not because she was injured, but because they were afraid that being “different” she would be ostracized.   However, since the appearance of an article in Back to Nature’s newsletter Wildlife Matters, numerous sightings have been reported in the greater Orlando area (including Brevard, Osceola and Polk Counties).  Kissimmee is some 160 miles south of where the alleged caravan wreck supposedly happened.  Similar sighting have since been made in Jacksonville, Sawdust, Tallahassee, Pensacola as well as other north and central Florida areas.  Could genes for the white morph have spread through migration or trapping throughout this vast area since the caravan wreck?  Perhaps.  Or is it possible that this color variant is actually native to Florida where it occurs in relatively low abundance in comparison to the Brevard NC population.  It’s also possible that the squirrels are native to only a single locality such as  Madison and have been distributed widely in central and northern regions of Florida by purchases from the squirrel merchant for whose existence there is considerable evidence..  Perhaps the circus connection and exotic origin of these squirrels was merely a clever marketing ploy invented by the salesman to generate interest in his living merchandise.  After all, Hawaii is an oceanic island with no native terrestrial mammals.  There is an all white squirrel found in SE Asia but it belongs to an entirely different genus; the likelihood of freely interbreeding with a members of a different genus half way around the world to slim to say the least.  If the Polynesian/Asian origin is improbable, then the circus connection is unnecessary.  The squirrels are probably simply Floridians.

UPDATE
In Spring of 1999, Melanie and Missy were released on the grounds of the Tallahassee Museum of History and Natural Science.  This was a quality of life issue and represents a personal victory for David Gale who has since left Back to Nature, Inc. (thanks, David, for all your help and cooperation).  Melanie joins a few dozen other white squirrels roaming the museum’s semi-protected confines (hawks are free to come and go and are known to occassionally prey on the squirrels).  The other squirrels which have markings similar to Melanie are not from central Florida but rather from the panhandle area.  According to Mike Jones of the Tallahassee Museum:   “[someone] moved some white squirrels from Sawdust [Florida] to a hunting and fishing lodge on the Ochlocknee River at Sopchoppy (called the Breakaway Lodge).  In the 1960s, a banker from Crawfordville, FL purchased this lodge.  His wife was friends with a member of our Board of Directors and offered to release some white squirrels on Museum property. This occurred sometime around 1970.”  The white squirrel folklore of the Sopchoppy area is remarkably similar to that associated with the Brevard population.   In addition to the circus caravan wreck, it also alludes to an exotic origin (China rather than Hawaii).  Although I personally put little credence into the Asian origin of either population, the similarity of the legends is intriguing. 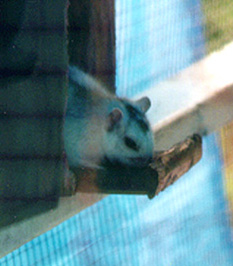 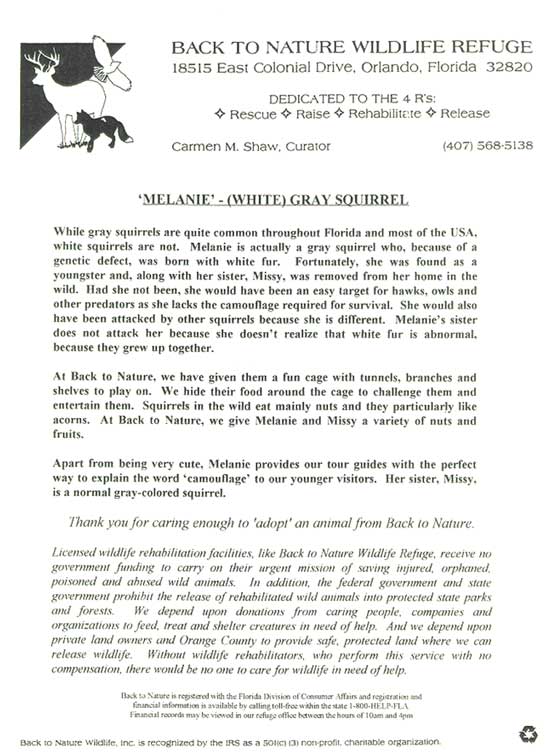 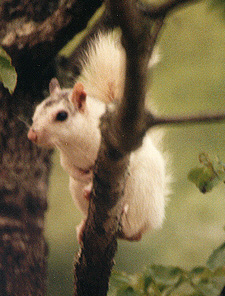 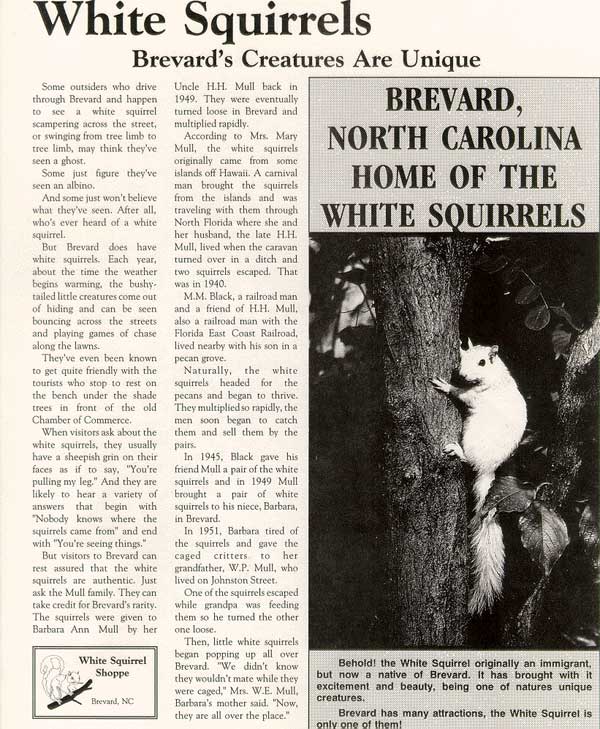