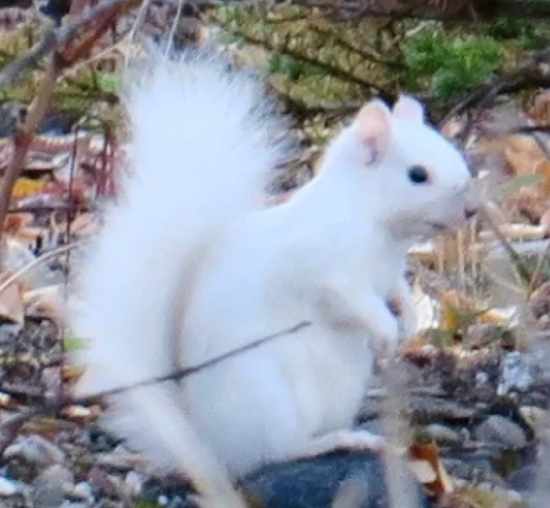 White Squirrel sitings are coming in from all over the continent. We just received word that a white squirrel was seen in the Yukon, which is a territory in northwest Canada. This area is sparsely populated so doubtful if the squirrel originated from the Brevard white squirrel.

Couple Steve Buyck and Elizabeth Blair from Stewart Crossing, Yukon were out driving when Elizabeth saw this out-of-place animal sitting under a stand of trees. She managed to snap a couple of photo’s before the white squirrel darted off into the bush.

The photo shows that it is not an albano as is has the dark eyes and not the pink eye color seen in albinism. Wildlife specialist, Meghan Larivee, who works with the Yukon government, said she though it was probably a red squirrel which is the type of squirrel that is found in Yukon with a leucistic gene. Leucism results in a partial loss of pigmentation. The squirrel’s dark-coloured eye indicates that it’s not an albino. The white squirrels of Brevard also share a leucistic gene, only Brevard squirrels originate from the gray squirrels.

We love hearing squirrel stories. Send us yours.