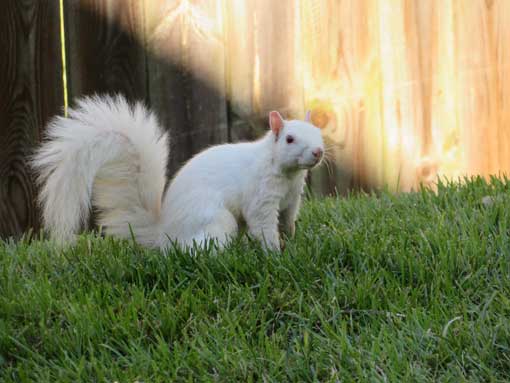 Rob Nelson a white squirrel enthauist and a biologist follows the white squirrels around the U.S. According to an article in the Washington  Post, “Nelson — a biologist and creator of science videos who lives in Charlotte — did not set out to become the White Squirrel Guy. In fact, his obsession with the ghostly creatures has waned in recent years. But the mechanism Nelson set in place years ago — an online tool that allows people to post details on where they have seen white squirrels — continues to tick on.

When I consulted Nelson’s white squirrel tracker for a recent day — April 10, 2019 — I learned there were reports of 13 white squirrels, from Brownsboro, Ala., to St. Paul, Minn. There were 14 the day before, including two in Xenia, Ohio. Or was that the same white squirrel, spotted twice?

This white squirrel database isn’t the most scientific project in the world. The squirrels it tallies are self-reported. Well, not self-reported — squirrels lack Internet access — but reported only by people who see a squirrel and are moved to share the moment.”

The White Squirrel Institute is currently working on reviving the white squirrel count here in Brevard, which originally started back in 2003.

If you are interested in participating in a white squirrel count please send us an email and we will keep you updated.