we're in the news

The White Squirrels of Brevard

There is an adorably peculiar creature scurrying about one of Western North Carolina’s most beloved cities. Brevard is home to a rare species of white squirrels—they are not albinos but are mostly snow white with tufts of dark gray fur on their heads and sometimes streaking down their backs. If you’ve never seen one in person, you may think them a myth or perhaps a marketing tactic by the town. No doubt the animal is real. Their origin story, however, perhaps that is up for you to decide.
Theplateaumag.com

Before the mayor opens the ceremony, before the news crews arrive, and before the crowds react to his forecasts, Pisgah Pete will eat his usual breakfast of one blueberry, one pecan, and one tiny heap of lettuce. Pisgah Pete is a squirrel and Saturday is a big day for him. Gardenandgun.com

Just south of Asheville, the town of Brevard is home to rare white squirrels. (Rumor has it that the population derives from an escaped carnival squirrel.)…
Rei.com 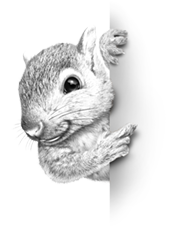 The White Squirrel Institute operates under the Community Focus Foundation of Transylvania County.

The Community Focus Foundation of Transylvania County, NC, is a collection of funds established by civic-minded people to meet a wide range of community development needs now and in the future. By being locally managed, the Foundation reflects the priorities of the community itself.

Note: Make checks out to Community Focus Foundation and in the memo line write: For the White Squirrel Institute