How it all started DonateAdopt

in Brevard, North Carolina and around the U.S. 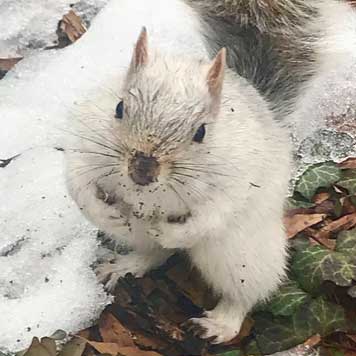 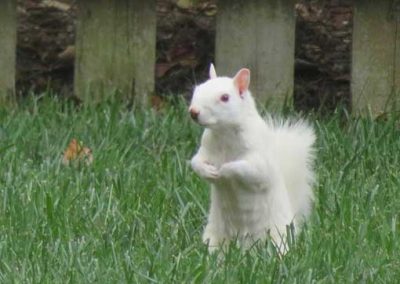 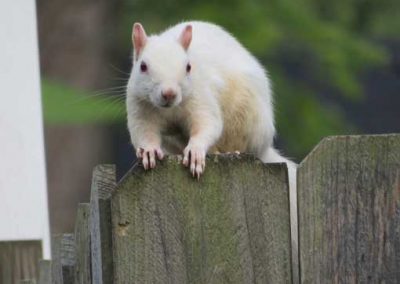 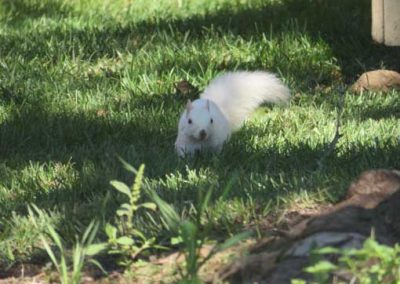 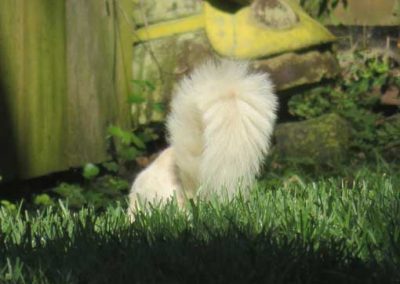 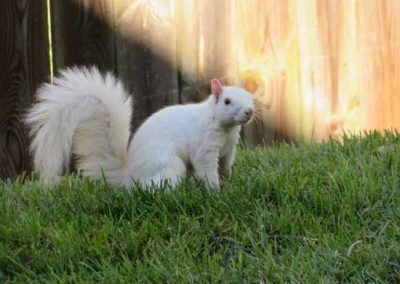 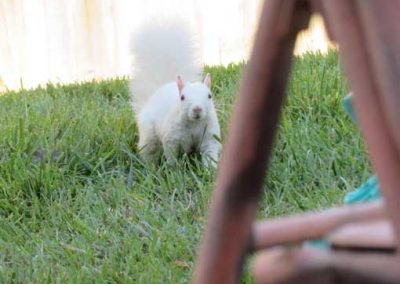 History of Bobbie and her babies (Oscar & Elliot)
~ Suzy Biecker 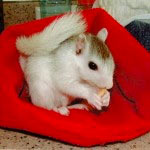 This is when I first started coming on a regular basis (3 – 4 times a week) and would leave whole peanuts, while getting closer and closer as Bobbie ate. I did not know if Bobbie was male or female. I would always find her near trees, near the building or near the water. Then I started calling her by name, Bobbie.

Bobbie started to eat from my hand. I noticed she was getting large mid-July. The last few days of July, Bobbie did not come when I called, nor did I see her. I still left food where I had before.

First week of August, Bobbie showed up, but would only stay a minute and then run down in between buildings towards one tree in particular. I started going to that tree and realized where her home was. Also, it was brought to my attention that Bobbie was not only a female, but a new mother. I could tell the babies had been nursing; I was so excited. I hoped that one day she would allow me to meet her new family. She came to me every evening and I also started leaving whole nuts in the crook of a limb in her tree for breakfast.

I came at the usual time to feed Bobbie and noticed a huge pile of fresh mulch at the corner of the building. As I walked closer to her tree I was devastated to see that her particular limb had been cut down. There were still limbs on the ground. I did not see Bobbie or any squirrels in that area. As I ran from limb to limb, I found the nest. Apparently someone realized they had brought the nest down; they had split the limb in half and laid it against the building with a window screen over it for protection. There were three babies, two white and one gray. I looked for Bobbie and called for her, there was no sign or answer from her. I waited to see if she would come for the babies.

I finally went home to get my husband to help with the babies. Upon returning, two of the babies were gone. I did not know if she had gotten them, or if a predator or human had gotten them. As I looked over I saw one of the white ones, face down in the cold mud bleeding badly from its mouth. By now it was totally dark and getting cooler. We hid and waited to see if someone would come for this one. Nothing happened. I finally picked it up and wrapped it in a towel. We hurried home to see if I could find someone to help.

My husband called every vet that offered 24 hour assistance. We only got one response and they refused to help. I remembered Elliot, the white squirrel on display at the White Squirrel Festival. I got online and looked for the name of the wildlife rehabilitator. Finally we were lucky enough to find the name, Jennifer Burgin, a local wildlife rehabilitator that was actually the lady with Elliot at the White Squirrel Festival. My husband called her and she was so kind to meet us in Mills River. By then, it was almost midnight. She took the baby which I named Oscar and 24 hours later called me and said he was still alive and she would be taking him to the vet that day.

I returned that next morning and looked everywhere for Bobbie, there was no sign of her. I came back that afternoon and walked more towards the water and to my surprise she came running towards me. She was muddy and hungry. I stayed with her as long as she would let me and followed her to another tree. She had apparently been there ever since they cut her limb off her old tree. This tree seemed to be strong and healthy. She apparently had not been in the tree when it came down. Unfortunately, I could not tell yet if she had the babies or if they even survived.

Much to my joy in the past few weeks, it had came to pass that both of her babies were alive and well. They are beautiful. The white one I named Betty and the gray one, Buster. I visited her every evening, and every day looked forward to the few minutes she gave me. While I sat and spent time with Bobbie, her babies seemed to be rather active. They tossed twigs and leaves down on us. They scurried relentlessly on the limbs, as if they wanted to worry their mother. But she is much wiser than they realize. She probably even played the same tricks on her mother.

Oscar is doing great. He is thriving and will need mouth surgery in the future. Unfortunately, it appears he may have to have his jaw removed, his teeth taken out, or his jaw totally realigned. His food has to be ground up and he has to have someone feed him. Only time will tell with Oscar’s recovery.

He has the most beautiful plume white tail and loves to give kisses. Someone needs to tell him he is not a flying squirrel. His energy can only be matched to the “Energizer bunny.” He loves Elliot and vice versa. Jennifer is providing a wonderful home and is giving him professional and expert care, I am sure he will have a wonderful life. But to me, his mother, Bobbie is the most beautiful. She has such a sweet personality and a spirit to match. She once was my only friend in Brevard and now she has become my best friend in Brevard.

I plan to provide food for her during the winter. I will also change the time I visit her, since they do not hibernate, they will need nourishment almost daily. I plan to go at the warmest part of the day, even if the high is only 30 degrees or lower. Hopefully she will have her babies to cuddle with and they will all be warm and safe. If not, then she will be all alone in her nest and if she does get herself warm she won’t leave until she is starving. So, I will pray for a winter that is bearable. Squirrels adapt wonderfully to the change of the seasons, but winds and deep snows make it hard for squirrels to survive.

Bobbie is enjoying the weather and the LARGE amount of acorns I have been bringing to her. The neighbor beside us has the biggest oak tree I have ever seen. I have actually been sweeping up the acorns and putting them in copy paper boxes. A funeral home in Hendersonville that is good friends with us has also been collecting acorns for me. Bobbie is very generous and shares the wealth. There is no way she could bury or store all I have been taking. The almanac says we are in for an early and hard winter so I want her well supplied and taken care of. She is still enjoying the sunflower seeds from my hands but does not stay long. She gets busy with the acorns.

Due to all the acorns I am taking to Bobbie I have quite a reception when I visit. Buster and Betty (Bobbie’s babies) are still close by and still share the nest with her. Jett is an older female white squirrel that also will take from my hand and is very sweet. I worry for her this winter. She is not able to get up in the trees as far or as fast as the others. She is on the ground a lot and people are constantly walking dogs without leashes. I look for her every evening and Bobbie does not run her off. I think Bobbie knows she is older. Then there is Crazy Willie. He is a grey squirrel and stands up to his name. He runs like he is on fire and constantly chirps at everyone and everything. He will come to me and does not want one peanut but 4 or 5 to cram in his mouth at one time. He drops them every few steps and will turn and look at me like it is my fault. Bobbie looks at him like “whatever.” He is a handsome male and I wonder if he may be a suitor for Bobbie soon.

Hint of snow already. I am so afraid we are going to have a hard winter. Bobbie is still coming to me and seems to not worry about the snow. She is so beautiful. You can tell she is slow coming down from her nest and I feel bad to get her out. I come to see her now around lunch. That is the warmest part of the day. Sometimes I just leave food and not call her.

Jennifer Burgin (our local wildlife rehabilitator) is a God send and I am so lucky to have gotten Oscar to her. She calls him Monkey but he is Oscar to me. I am so very proud to be his Godmother.

It has been a mild few weeks, but we have had some cold days. I have sat out with Bobbie a couple of times when the wind was blowing so hard it almost blew her over. I fear her little ballerina toes get really cold at night. I took a washcloth for her to sit on and the second evening I brought it out she ran up the tree with it. Using it for covers no doubt. She is welcome to it of course. She looks healthy but on the thin side. She has been a gift to me since I left my hometown and moved here. I treated her today with crackers and Jif peanut butter. She loved it. She is so cute cleaning between her toes.

To help the sick and injured White Squirrels and area wildlife in  Transylvania County by helping to support our wildlife rehabilitators in the conservation and preservation of our wildlife so they can be returned to their natural habitat as quickly as possible.