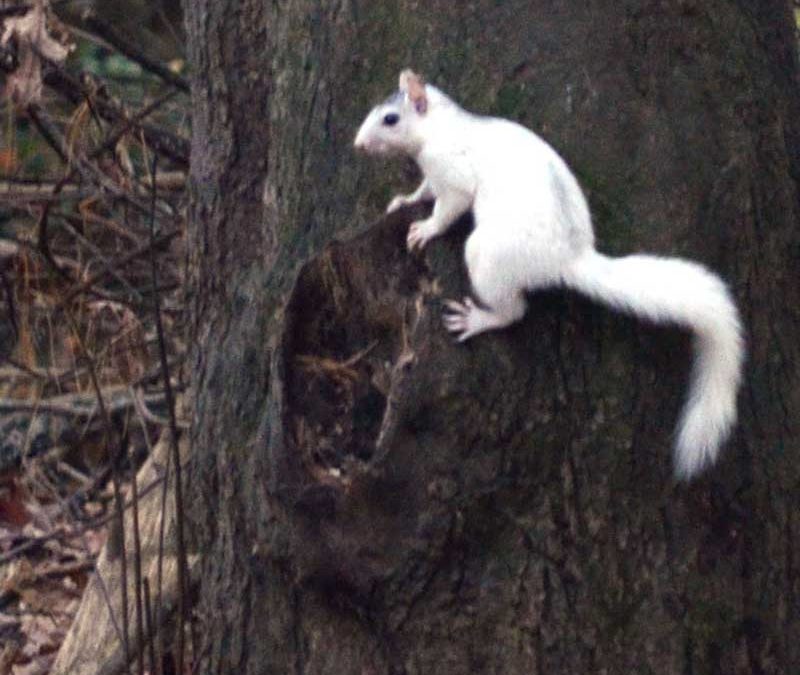 Brevard’s white squirrel, whether found in Brevard or a neighboring community, typically has a white coat with dark eyes, a head patch, and a dorsal strip that broadens at the shoulder resembling a saddle.

The head patch can be solid, horseshoe or doughnut shaped; it may resemble a triangle, a diamond, deer tracks or even a widow’s peak (like Count Dracula’s). There is some evidence that this head patch pattern is inherited (Burgin: Inheritance of Head Patch). These squirrels are a color variant of the Eastern Gray Squirrel with which they freely interbreed and have mixed litters. Offspring of such matings are either of the white or gray variant, not an in-between blend. 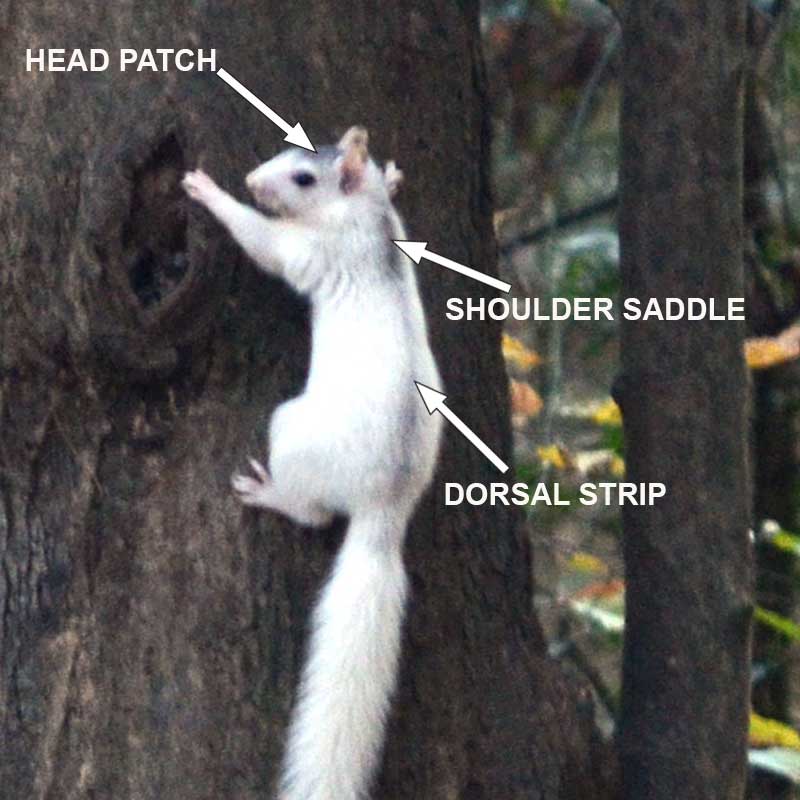 Such squirrels are found over a 50 mile radius in western North Carolina from Cashiers in Jackson County to the west, to Saluda in Polk County to the East, From Travelers Rest in South Carolina to the south, to Enka/Chandler and N. Asheville in Bumcombe County to the north (see regional distribution map).  Squirrels with this pattern are thought to be direct descendants of a pair which had the same markings introduced in Brevard from Florida in the mid 20th Century (see Barbara Mull Lang’s personal account). Whether their wide distribution is due to dispersal or capture-and-release or both is uncertain. At least one population,  in Walkertown NC (north of Winston-Salem), is known to be a transplant from Brevard when former residents moved there; other such introductions are suspected.

The pigmented eyes, which are the same shade as that of  normal gray squirrels, help reduce glare so that the Brevard squirrels have good vision unlike albino squirrels that lack pigment in their eyes. Good vision is essential for an animal that does arboreal acrobatics 40 or more feet above the ground. The hairs of the head patch and dorsal strip are similar to those that cover a much wider region of a normal gray squirrel and help the gray variant blend in with tree bark. The white hairs are similar to those usually confined to the abdomen of gray squirrels (see image to left) and camouflage them against the sky when seen from below. Thus, our white squirrels have pigmented hairs, and gray squirrels have white hairs; its the distribution that’s different.  For more on the comparison see “What is a White Squirrel?” 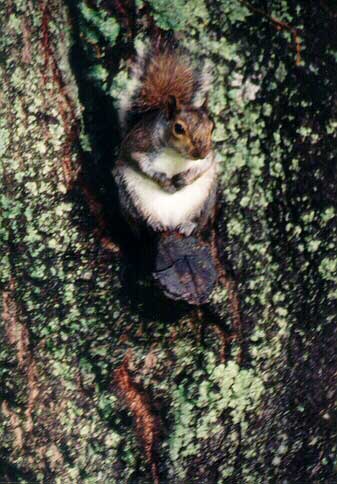 The picture to the right shows siblings from the same nest foraging together. Clearly the white sib is more noticeable than his/her brother/sister. When threatened, foraging white squirrels behave just like their grey brethern; they run to the nearest tree trunk and do a spread eagle.  But instead of blending in they stick out like “sore” squirrels.  Why this white variant should be so successful when it presumably is more visible to predators is uncertain. Perhaps, human preference/protection is a factor. If a major source of mortality is road kill, being more visible may actually be benefical, particularly in a community that prides its unique mascot.  It’s also possible that predators, such as hawks, have “search images” that don’t match with white prey*. Another possiblity is that the benefit has little to do with coat color, itself;  that the gene(s) effecting this difference in hair distribution is closely linked on a chromosome to some other, at present unknown, gene that imparts increased vigor, improved health, or some other beneficial feature.  One comment regarding this latter possibility is that the white variant is not nearly as common in its native Florida as it is in Brevard (or in transplants from Brevard).  They occur in low frequency throughout central and northern Florida.  However, the white population from the Madison FL pecan orchard from which Brevard’s squirrels are thought to be derived, was flourishing in comparison. This suggests that there may have been something other than just a white coat that gave the Brevard “Adam and Eve” an advantage.  What ever the reason, it is worth noting that Brevard NC hosts the most abundant, in both percentage and absolute number, population of white squirrels known in North America.

* In this context, the following anecdote my have some relevance.  A Brevard resident had visitors who brought their dog.  Squirrels were very abundent in her neighbor and there are about equal numbers of white and gray.  The dog regularly gave chase to gray squirrels but just stared at white ones. 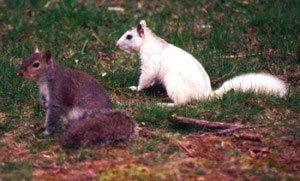