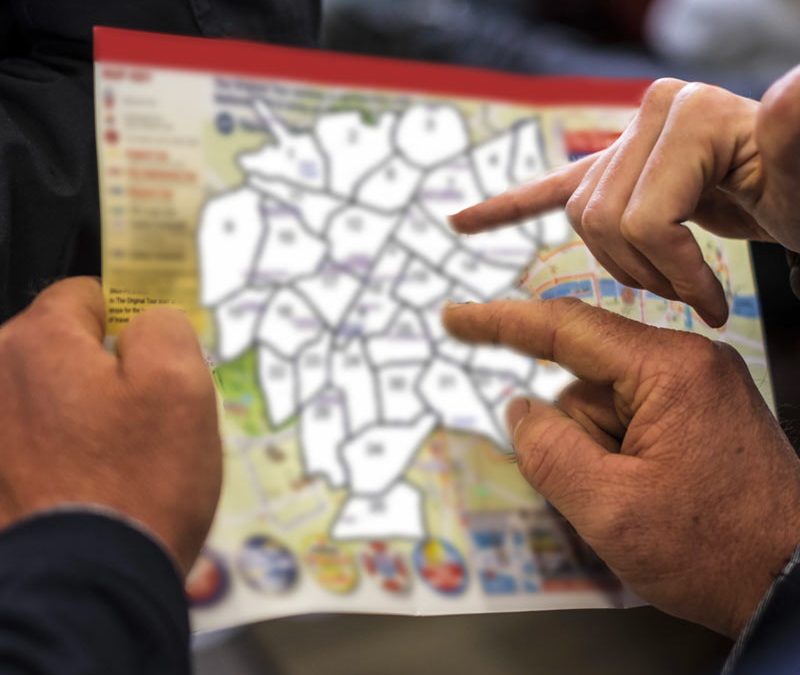 The original self-guided tour was a collection of foam board posters displayed at the Transylvania Heritage Museum each Memorial Day weekend.  A handout describing the posters resembled this document but lacked its detail and transitions.  That was intentional so that observers could view the posters in any order they wished.   It was more of a virtual tour than an actual one.

This year marks the tenth annual White Squirrel Festival.  For the first eight, besides organizing the virtual tour, my role was to convince doubters that the ghostly critters actually existed by showing them some.  You’d be surprised how many people thought that they were a twist on the proverbial white elephant.  Weather permitting, I led approximated five walking tours on the Brevard College campus during the two day festival.  In all but one of almost 40 tours we saw at least one of the sought out rodents.  But even on that one in which we were shut out I received positive feedback. The one hour walk served as an extended Q&A session.  As a retired professor, I could have easily “professed” that long but I never had to.  One question lead to another and although the order was often different, the same questions popped up again and again.  I guess that qualifies them as Frequently Asked Questions (FAQ).  Now that I have a condition that is aggravated by sunlight and  can no longer lead tours, I thought that a “road map” coupled with a FAQ might substitute for the walking tours.  I choose the Brevard College campus (Sector 13) for the same reasons we scheduled the actual tours there.  Its easy to find.  The main gate surrounded by a rock fence can be seen as one descends down N. Broad Street from the County Courthouse. There is plenty of parking around the bell tower, especially when the college is out of session. There is an abundance of white squirrels and probably most important, with its park-like landscape, squirrels can be seen from a distance (bring binoculars if you have them).  If you are driving during the festival, the street barricades end just short of the College so that you will be able to pull right in. The FAQ can be read before, during or after the brief self-guided tour.

Squirrels have two peaks of activity, one in the late morning and the other in late afternoon and early evening. Although some squirrels will be foraging somewhere between dawn and dusk, noon to 3:00 p.m., especially on a hot summer’s day, is probably the worst time. Other suggestions can be found in Procedure section. Please don’t attempt to do a drive by. The approach of your vehicle may “spook” the squirrels and ruin the experience for those who have waited patiently for the squirrels to emerge. The only way to guarantee seeing a white squirrel is to spend significant time in and around Brevard. (By the way, that’s an example of circular reasoning as I could define “significant time” as enough time to see a white squirrel). There are other sectors with more white squirrels (see Rank Order table below), but these are in residential areas with little parking and much more difficult to find.. Residents value their privacy. During the fall squirrel count I usually recommend carrying a pair of binoculars, clipboard, or wearing a badge of some sort. That usually puts residents at ease. Once they realize what you are doing, they usually become a wealth of information.

What follows is an excerpt from the “Tips” handout for Sector 13 that we distribute to volunteers. It briefly describes their adopted sector and how to approach sampling it. The Sector Map not only serves for orientation but for recording the locations of white squirrels, gray squirrels, and nests. The Squirrel Count is an attempt to count all squirrels, white and gray but it is not a census. We do not expect to see every squirrel that resides in the study area. During the two hours of an actual count, not all squirrels will be out, and the observer will not see all of those that are out. Thus, the Count underestimates the actual squirrel population. It is intended to be a random sample that estimates the percent of the white variant. If we don’t estimate total squirrels, we can’t calculate percent white. The larger the sample size and the more complete the count, the more accurate the estimate will be. However, for most of you doing this self-guided tour, your goal is to simply see a living example.

The  “FAQ”  page is intended to simulate the extended Q&A of the walking tour of previous years. In the interest of time, you might skip questions that are of little interest during you quest for a white rodent sighting but consider coming back and reading them more thoroughly on your drive home. The Procedure Sections demonstrate our methods. Although this section is more detailed than you need to simply “spot” a white squirrel, it does offer some insight into squirrel habits and behavior (For more information about the count see posts “General Information and Procedure“, “The Study Area“, and “The Purpose of the Squirrel Count“). Happy hunting.

Tips for Sector 13: Acerage: 37. Type: college campus. Estimated Time 0.75 hours. Park at main entrance. (gate is opposite the letters “BR” of ”N. Broad” on the map; in real life it is opposite a strip mall containing Highland Book Store and Radio Shack.  From this location a number of park-like lawns can be surveyed, including behind (west) of classrooms (McClarty-Goodsen & Moore Science Building), Beam Administration Building, fountain (academic quad), library and area in front (south) of Taylor and Green (former dormitories). From here proceed toward Kings Creek between Dunham (Music Hall) and Green. Although the Gym on the other side of the creek, is in a different sector, squirrels are often active in the shady areas near the two foot bridges. Follow the road parallel to creek behind Jones Dormitory and head towards the barn (now a theater). Turn right between volleyball court and barn, heading towards President’s house. Pause in wooded area before the President’s house since it is also the home of many squirrels. Head left (east) behind the President’s house and around back of a retreat house. Head south and pick up a driveway leading to Guest and Alumni houses. Cross the road between the infirmary and cafeteria and pass through two parking lots. Wrap around to front of the cafeteria (note: woods along French Broad Ave. have squirrels). Now you should be back in the vicinity of your car.